God is speaking to me through the shredded fabric of my son’s bear’s nose.

The little bear, affectionately dubbed “mama,” became my son’s bedtime companion after he spontaneously decided that he no longer wanted his binky. It fell on the floor at the store, I gave him a new one when we got home and he had already resolved to be done with binkies forever. He refused it and all other binkies after that day. It was shocking because he was “that kid” who ALWAYS had his binky in his mouth. I had no idea how I would ever get it away from him. A couple days after he  was all-done-binky, he got sick for the first time. He was inconsolable and without any means of coping. Then, I got the idea to give him the little bear. It was love at first bite. He started chewing the bear instead of the binky and refused all teethers. After about a month, I told my mom how attached he had become to the “mama”, to which she responded, “how many mamas do you have?” I proceeded to buy three of the now discontinued bears.

I tried to save the mamas and cycle through them evenly, but once teeth started coming in, their little organic cotton noses didn’t stand a chance. About three months ago, I started having to mend them every time they got washed. We cycle through a mama at least every other day, sometimes two or three per day, depending on the day’s disasters. You can imagine what the mamas must have started looking like. In case you can’t, here’s an idea… 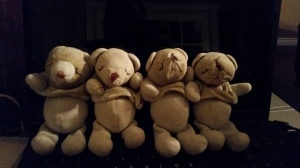 The one on the left had been mended with fabric from a sheet. The one on the left had started losing cotton through the hole in its nose and reminded me of a very sad bear-pug. My son likes to pinch the thread on their noses, but also has a sensitive gag reflex, so every time he got the thread too far into his throat, he would gag. He would then come over and ask me to “fix mama” repeatedly, which usually resulted in some stitching or scissoring or something to temporarily rid mama of the unseemly thread. About ten minutes later, we would repeat this process. I realize this seems like really useless information, but that brings me to this morning.

I gave up on the “noses made of sheet” idea. The fabric just rips too easily and I don’t always have time to mend them before some crisis necessitates the immediate presence of a freshly-washed mama. I decided to rip one mama’s sheet nose off and try re-stuffing the actual nose with the sheet. I felt slightly creeped out by slicing the mama’s actual nose open, but it was necessary. As I sat there, using the point of my fabric scissors to stuff pieces of sheet inside the mama’s nose, I started thinking about the daily lengths I go to for my son. Here I was, sewing the first of four mamas that would need this procedure, thinking about how best to get the job done in an aesthetically pleasing way (pretty sure I failed…) so that my son would be happy with a nose well-sewed. I have spent countless hours chasing after lost mamas, darning their noses, cutting pieces off of them as they unravel and searching for new ones on the internet. Why the slight obsession with the mamas? Because I want my son to feel comforted, happy and secure.

Even through my best efforts, I will never be able to give my son what God can give him. I look at the badly stitched, blue-threaded nose of the mama and I think to myself, “this is so clearly my work.” There are times in life when we just need to commit our works to God and say, “Amen.” I will continue to give my best to my son. He is a blessing from the Lord and I love him more with each passing day. And yet, I will never be able to love him as much as God loves him. As I waited to meet him for nine months, God carefully crafted him inside my womb, down to the last hair that would someday be on his head. He loves him more than I’ll ever know or understand. He loves all of us that way. He desires to work in our lives in a deep and meaningful way. The Holy Spirit wishes to have a relationship with each of us. He leaves nothing incomplete. He restores everything. He shapes us into the people He meant for us to be. As much as we let Him, He will transform our lives. There is nothing that He cannot do. He wills for us all things for our good. If God had mended the mama, she would have glowed upon leaving His gentle touch.

While I am here, laboring for the cause of my Messiah, I pray that I would be found faithful in those things entrusted into my hand. Surely, my children will be the most precious things given to me to care for. My husband, my children, my sisters, my parents, my family in Christ, and all of those with whom God knits me together should be the constant recipients of my wisdom and kindness. I will invest all I have to give into the Kingdom of God and I hope to be a light in the darkness all of my days.

But my efforts alone will never be enough because they were never meant to be. I thank God that He sent His Son to be the sacrifice for my sins, and that He sent the Holy Spirit to be my constant comforter on earth. I can’t do it by myself. I can’t live up to my own standards, let alone those of the One, Holy and Sovereign God. Someday, all things will be made new again and all things broken will be made beautiful. In the mean time, I thank God for the work He does in our lives as we commit our paths to Him. This is the most important lesson I can teach my little son. When all else fails, including the nose of your mama, God will always be there for you. Happy birthday, mama. May your nose be ever-intact.

Seek the Lord and His strength; seek His Presence continually! – I Chronicles 16:11